Here's one of the more recent examples of the sexual politics of meat. 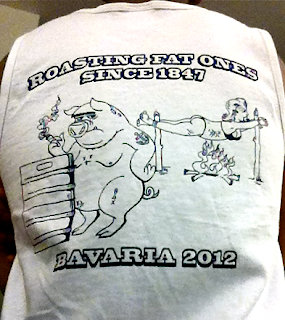 This was produced for an Amherst College fraternity last spring. For the story from an Amherst feminist perspective see here: http://acvoice.com/2012/10/08/amherst-college-roasting-fat-ones-since-1847/

Fraternities gravitate to pig roasts as they inscribe masculinity through the consumption of a dead animal.  As feminist bloggers note this t-shirt is misogynist, celebrating violence against women.

But it is not only that. That this t-shirt exists in 2012 and that its roots in the sexual politics of meat go unremarked reveals how truly nested in our culture is the connection between masculinity, male bonding, and meat eating.

So here's Sexual Politics of Meat 101

1) Meat is a vehicle for women's disempowerment.  The presence of meat symbolizes the empowerment of men and the disempowerment of women. Dead animals are one of the primary means for male bonding, especially in American culture.

2) The interchangeability of dead bodies/live bodies/objectified bodes/consumable bodies shows the presence of the structure of the absent referent. The absent referent is that which disappears as having meaning to him or herself and becomes representative or metaphor for something else. The dead pig being roasted is clearly the referent, the treatment of a woman is layered over the knowledge of what actually happens to dead pigs. The woman is substituted for the dead pig, and with that, another aspect of the sexual politics of meat is inscribed.

3) The interesting aspect of this t-shirt is showing the male pig as participant in the roasting of a woman; this too is functioning of the absent referent; he has become the representation of the power of the visual, the look that the t-shirt is inscribing, the look of the fraternity members, who themselves know they are insulated from actually ever being roasted because they are human. So, in reversals that reveal: the white pig stands for the human, and the white woman stands for the consumable animal. The t-shirt proclaims human superiority as male-identified and the consumable non-human animal as woman-identified.

In the transformation of the explicit woman-hating of this t-shirt we find this, an adult bacon costume, as it is labelled. Having women celebrate this consumability becomes popular culture's way of hiding the misogyny within sexuality and fun. Lady Gaga didn't start this trend, but certainly lifted it to a new height. Now Halloween prepararations deliver it back to us.

Here is a recent example from Germany: 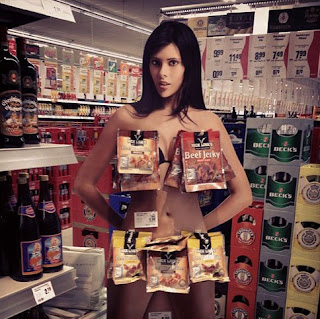