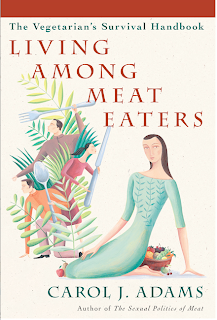 Living Among Meat Eaters is a very special book for me. I wrote it because I had done things wrong for so many years, and it was so liberating when I realized that and found a different way. I realized that people who aren't vegans or vegetarians need our interactions to be about us; as long as it is about us, what WE are doing, what WE believe, it doesn't have to be about them and what they are doing. They, who really do feel defensive, want us to be the ones who are on the defensive. So Living Among Meat Eaters proposes a way to reorient the dynamics.
I really appreciate hearing from people who have been moved and touched by the book. The idea was to help people so they didn't have to spend as many years as I had coping with the meat eating world. I want us to thrive! While the book is directed toward vegetarians and vegans, it presumes veganism, and all the recipes I provide are vegan.
So I was heartened this week to get this email from Ruth in Perth, Australia:
Dear Carol,
I'm sure you hear this a lot but I had to write and say a very warm thank you for your book "Living Amongst Meat Eaters".
After being a vegetarian for five years I was ridiculed for making this small but important step in ethical eating. The questions "but you eat eggs" and "what about the leather you're wearing" were constant attempts to berate what I was doing. But they also stimulated me to think deeper; what about the leather I was wearing... After pondering veganism for about a year I finally worked up the courage to watch a few small videos on you tube (meet your meat and one about bobby calves, then Earthlings) I made the jump and wish I had done it sooner.
What I wasn't prepared for was the feeling of total elation; for finally having my lifestyle choices in line with my ethics, being aligned with a sense of total isolation. I was making a massive lifestyle choice that not only went against that of my friends and family, but of the majority of the world. Still, because you are doing something that is compassionate, it gives you the strength to pursue it and be proud of it.
But when I saw your book in the one-and-only vegan outlet I am aware of in Perth, Western Australia, the title completely spoke to me. They had ordered in about ten copies - obviously anticipating the demand. I flicked through it and read half in the first night, only stopping so that I could get a notepad and re-read the whole book, this time taking notes.
Your book is exactly what I needed and I'm sure, what hundreds of thousands of people have been waiting for. We all know the reasons why we are doing it, but when faced with ridicule and scorn, it can be hard to express all the positivity of veganism without becoming defensive. Your point (or referencing someone else's point) about us all having a hole in our conscience, where we love animals but feel slightly guilty about eating them - resonated within me. This will help me immensely when I speak to my friends and family because I know that they, like me, have the same doubts about what they are doing, they just haven't taken the jump yet. I will now look upon everyone I meet as a blocked vegetarian and try my best to portray my lifestyle exactly how it feels; with ease, calm and happiness because I am at complete peace with the choices I am making.
Thank you so much! I can't wait to read your other titles.
That's one thing about books--they are a gift that keep on giving: first to the writer as she crystallizes what she wants to say, and learns from the process of writing how to say it; then, if the writer has been successful, the book goes out into the world touching people while the writer stays at home wondering what her book is getting up to!
Here's a link to the publisher's website for Living Among Meat Eaters:
http://www.lanternbooks.com/detail.html?id=9781590561164
Share |
Posted by Carol J. Adams at 10:49 AM