The Dairy Council Is Wrong: Let me tell you the ways

Let's begin with the obvious: A new campaign for cow's milk is misogynistic, as it pictures an unfortunate, beleaguered, cowering white man holding milk. Since the brand isn't given we could imagine it was soy milk or hemp milk, but clearly the dairy industry wants us to believe this poor guy is holding cow's milk. 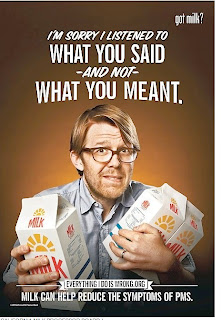 Why is he cowering? Why is he beleaguered? Because a woman has PMS.

The website that accompanies this p.r. campaign reinforces the misogyny, implying that all men share this need to defend themselves from the moods women experience because of raging hormones.

All this to promote a product that actually helps deplete calcium from women's bones rather than strengthening them. And contributes to the ongoing medicalization of women's lives. If you want calcium, you'd be better off turning to kale and other leafy greens.

Perhaps, the Dairy Council is getting desperate. As more and more people learn through books like Whitewash just how cow's milk is obtained, learn of the terrible lives cows endure to produce what I have called "feminized protein," they are rejecting cow's milk. The Dairy Council must know at this point that with so many wonderful alternatives in local grocery stores, more people are asking, "why are we still enslaving female animals to be our wet nurses?" Mercy for Animals shows us what cows endure for a product we don't need:

The question is "Got Soy Milk?" "Got Almond Milk?"

Dairy Industry--I am listening to what you are saying and what you are meaning. Yours is a dangerous campaign, built on stereotypes about women, requiring the imprisonment and suffering of other animals, offering misleading information about sources of calcium, and promoting a product that many women of color can not digest because of lactose intolerance.