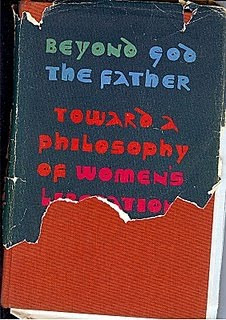 The first time Mary Daly came for dinner – it was the fall of 1974 – she brought a wine whose symbol was a black cat. A small plastic black cat hung from around the wine bottle’s neck. That night I put it on my dresser top, and it is still there this morning, 35 and 1/2 years later.

Of course she brought a black cat. Mary Daly recognized the negation that traditionally happened to women and anyone associated with them (black cats and their association with women witches). Mary considered this a reversal and her writings expose many examples of such reversals. What Mary didn’t know as she handed me the wine but she was fascinated to learn was that two of my ancestors had been killed as witches at Salem in the seventeenth century.

Of course Mary would join one of her feminist students for a vegetarian dinner. She was interested in what we thought, what we read, how we lived.  In Beyond God the Father, she rocked that formerly secure world of patriarchal religion with insights that spill out on every page. After it came out in 1973, it became a book I read over and over again because I didn’t really get it all the first time through. So many things were being shaken up! In that book, she says, “Feminism is not merely an issue but rather a new mode of being.” Together with other feminists, in her classes, or over dinners, or planning a grand protest at Boston College when she was denied full professorship, we explored this new mode of being.

Mary Daly introduced the word “ecofeminism” to me that same fall of 1974 in her Feminist Ethics class. This morning I also looked over notes from one of her classes, where she has been taking the ideas in Virginia Woolf’s Three Guineasand making them her own. She was identifying the deadly sins of the fathers: processions – reification of the process, stunting of female becoming. Daughters are not divine. Male pride twists female pride into vanity, shame. Life-giving blood dirty  [i.e.., menstruation and when giving birth]; death-blood from war, fights, games, worshipful.

Mary exposed the reversals that had become accepted as “truths” or givens in our society. In the Wickedary, she provides these examples of reversals or inversions: “a: the absurd story of Eve’s birth from Adam b: the belief that man is superior to animals c: the worship of male divinity d: the belief that the Radical Feminist world view is ‘narrow’ and/or ‘dated.’" In celebrating the black cat, as in many things she did and wrote, Mary was reversing the reversals.

When I proposed writing my paper in her feminist ethics class on the connection between “feminism and vegetarianism,” she encouraged me. The roots of all my work on The Sexual Politics of Meat began then, 35 years ago. Why is meat, which is dead, associated with men and so highly valued? Why are vegetables, associated with the feminine, as well as a “vegetative state,” always being put down? And so I began my own work at reversing the reversal.

She gave me the intellectual space to explore these wild ideas. To her, nothing was too “wild.” She let us discover what is there when we have removed the layers of lies and distortions that the reversals have created. She was a visionary, a brilliant thinker and writer, and she was also generous.

She provided a model for critiquing dominant culture. Here’s my journal entry from Mary 4, 1976: “For my frustration about not finding readiliy accessible information about fem[insists] who were veg. in the past—write an article on Veg. and Fem Historiography use Mary’s analyses from B[eyond] G[od] t[he] F[ather]: how people don’t take seriously thru trivialization, erasure.”

Mary Daly was a radical feminist philosopher (theologian couldn’t encompass all that she was accomplishing); she was proud and modeled pride; why should women be deferential? In one of her Feminist Ethics classes, Mary said “Women’s anger is creative.”

Has the world changed as much as we would like to think since the thunderous insights of Beyond God the Father? With right wing religious leaders and Catholic priests dictating the abortion policy of health care, we have a Taliban-like influence stalking our land. Read Mary Daly to understand our world.

“Feminism is not merely an issue but rather a new mode of being.” Mary, courageous and imaginative and resolute and visionary, showed us this.
Share |
Posted by Carol J. Adams at 11:30 AM 13 comments