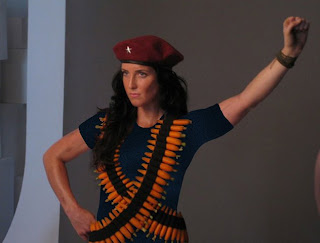 As far as I can learn, Susan B. Anthony, Elizabeth Cady Stanton, Gandhi, Abraham Lincoln, Frederick Douglass, Nelson Mandela, and a host of other world-changing activists and leaders never had to take their clothes off in the service of their cause. They would have laughed at the idea. Is it because they were concerned about human rights? Is there something peculiar to animal rights that has inspired at least one organization to continually strip clothes off of its (overwhelmingly female) activists?

Often it is said, animal activists are the voice of the voiceless. This claim, so hugely anthropocentric (as though the only voices that we can hear speak words), creates an anxiety about what is our responsibility to these beings whom we are tacitly acknowledging are different from us because they can’t be speak. It creates an urgency: we must do what we can, we must do it now. But then the interesting thing that happens is that, rather than giving voices to its activists, it takes away their voices by emphasizing their bodies, their naked bodies.

The latest to be added to the long list of naked or nearly-naked activists is Lydia Guevara, Che Guevara’s granddaughter. As far I can tell, Che Guevera never stripped for his cause; and the only time he is shown nude is after his death.

This is not the picture being used in the animal campaign. I asked my son to add a t-shirt. The question I want to pose is what is the meaning of the t-shirt? Is anything gained by asking Lydia Guevara to take it off? Why does any animal activist think a t-shirt removed is more effective to raise the issue of animal exploitation?

I would argue that the t-shirt is to this picture what stripping women is to PETA. It is their “tell.” According to Wikipedia, “A tell in poker is a subtle but detectable change in a player's behavior or demeanor that gives clues to that player's assessment of his hand.” Clearly, PETA feels that if they were to let Lydia Guevara keep her t-shirt they would be giving away something they don’t want to. They need her unclothed; that is the message they have to convey. PETA can’t keep t-shirts on women because it gives away something, something of their power, or the power they have created to captivate the media. Put the t-shirt on, and perhaps no one will pay attention.

Many people respond to say, “well I don’t agree with this part of their work, but PETA does many other good things.” But that is the aspect of the ‘tell” that is so important. Wikipedia continue s “A player's tell gives information only about that player's assessment of his own cards, and hence is reliable only when that player has accurately assessed his own hand.” Has PETA accurately assessed its own situation? Is it really willing to risk its good works by these calculated uses of airbrushed, youthful, correctly proportioned women? By proliferating them, PETA implies that it needs these naked campaigns. This makes PETA more powerless than they need to be, and subject to the male (adolescent?) gaze in constructing its campaign. Why does PETA fear to clothe its women? Why can’t PETA let women have voices along with their clothes?

People say, “Sex sells.” I say, “Sex sells sex.” PETA conflates sexualization and animal exploitation and this harms animals. (That it also harms women is a given, argued not only by me [in Pornography of Meat] but on countless blogs as well.)

I don’t believe animal advocacy needs naked bodies to make its point. Animals can be compelling on their own, if we were to give them a chance and a real voice.
Share |
Posted by Carol J. Adams at 12:24 PM 10 comments