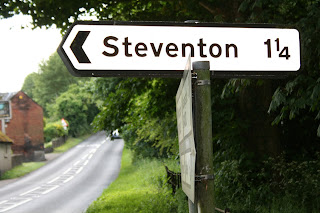 In the midst of a life filled with meeting deadlines and responding to the latest negative images interconnecting women and animals, I recently had a glorious weekend in Hampshire, England. It was a Jane Austen weekend; and it was dedicated to her beginning and end. 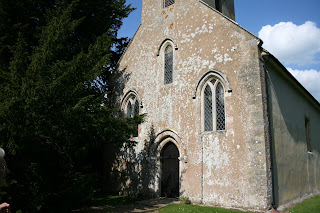 The parish church of Steventon is the church her father served when Jane Austen was born. It remains an active congregation and they maintain what I call “a ministry of Austen hospitality.” They encourage tour groups to let them know they are coming and they meet them, open the church door, and answer questions about Austen’s time in Steventon. My guide and I sat quietly in the church for several minutes. I offered thanks for the life of Jane Austen.

Then we walked to the site of the old Rectory, 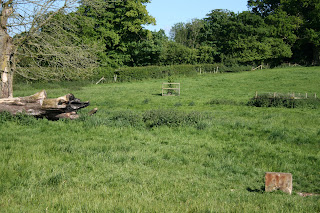 where Jane Austen was born. The building is no longer there, but one can stand by a fence and look in and continue the wonderment of one’s thoughts that Jane Austen lived here, walked here, worshiped here, began to write here. 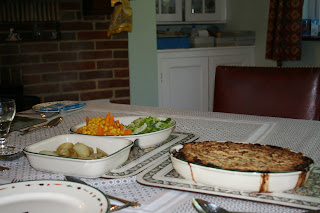 Knowing that I was a vegan, my most hospitable guide had prepared a vegan shepherd’s pie. We talked of Austen’s life and novels as we enjoyed this traditional British meal, updated to the 21st century!


The next morning we headed to Winchester, where Jane Austen was taken when she became very ill in 1817. There she died:

In one of her last letters, Jane Austen described the house and referred to the “neat little Draw[in]g-room with a Bow-window” that overlooked a garden. We sat on a ledge facing this bow-window and, again, thought of Jane Austen. Her last days were painful. 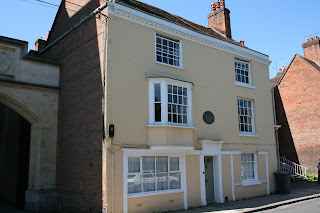 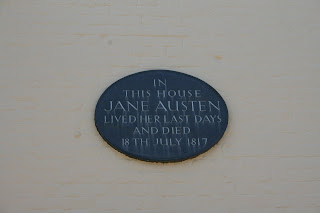 On the day of her funeral, her sister Cassandra “watched the little mournful procession the length of the Street” and then it was lost from her sight.

Austen was buried here, in Winchester Cathedral. You can find her ledger stone on the floor: 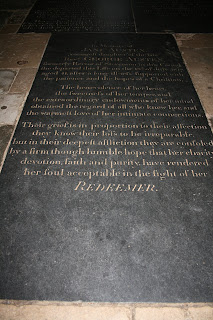 If you are only 5’5”, it is hard to photograph this. Even standing on a chair purloined from nearby, it’s not easy to get a good angle. I spent a long time trying to get a good picture and then realized, lots of professional photographs exist. So, I put my camera down, and looked up. 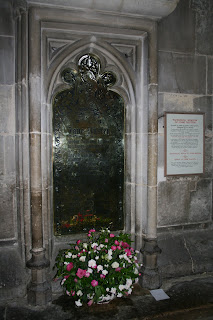 A beautiful bouquet of flowers stood underneath a memorial brass plaque to Jane Austen. According to the little booklet on Jane Austen and Winchester Cathedral, the plaque was paid for by Austen’s nephew, a Victorian writer, who penned her first full biography.

Do you see that little scrap of paper? I went over to see what it said.

In her letter to her niece, after the funeral was over, Cassandra told her, it wasn’t watching the funeral procession that overpowered her. It was writing the letter that described it. Oh, the power of words.

And with me, it was when I walked over to the flowers and found that the scrap of paper next to it, left, clearly by another Jane Austen lover, said: "You must allow me to tell you how much I admire and love you." 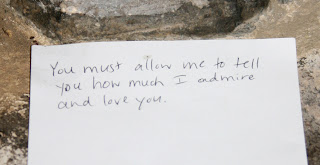 How brilliant. Or, as my British host said in response to a claim I was making about Jane Austen, “Clever you!” These are the words from Darcy’s first proposal to Elizabeth Bennet, (almost, Darcy says “ardently” rather than “much”). Sitting there, by the flowers, they take on an entirely new meaning. How ardently we do love and admire you, Jane Austen.


Carol J. Adams is the co-author of The Bedside, Bathtub, and Armchair Companion to Jane Austen (Continuum) which has been nominated for a Regency Award for best 2008 non-fiction on Jane Austen by the Jane Austen Centre in Bath, England.

I think you can still vote at http://www.janeausten.co.uk/awardsurvey.ihtml
Share |
Posted by Carol J. Adams at 2:04 PM 3 comments

Links to this post
Labels: Bathtub and Armchair Companion to Jane Austen, Bedside

In May 1995, I bought, at auction, the office equipment of the national office of Operation Rescue. It had been seized earlier that spring to help settle a $1,000,000 legal judgment against Operation Rescue for its role in trying to close down the Planned Parenthood clinic in Houston.

The office equipment included six computers. When the constables arrived to seize the equipment from the national office of Operation Rescue, an office person attempted to destroy the material on the computers, but had only eliminated the most recent operating system. Using an older operating system, the entire contents of the six computers was discovered. One of the items we found on the hard drives was the diary of anti-abortion clinic protestor. He was called a “missionary to the pre-born” and it was part of his job to update people who provided monthly support to him.

The diary was chilling. It tells, matter of factly, his daily labors -- of how he would stand outside a Dallas clinic and yell “murderer” to the doctor as he arrived. Though Operation Rescue claimed they did not do it, he was writing down the license plate numbers of all the cars who pulled into the place. One night, he came back and went through the garbage that had been left out. He followed the office secretary to the bank where she was making a deposit and then demanded that the bank not accept the “blood money.”

It takes many pages, but he describes how he and others, using several cars and over many days, succeed at following a doctor home. The doctor lived in a gated community, but through deception and persistence, they get in and discover where he lives. When we read this in 1995, we immediately notified the doctor.

This “missionary” also found ways to divert women coming for abortions to the anti-abortion “clinic.”

On the day I bought the equipment, I was a nervous wreck. My partner, who was too well known to Operation Rescue to attend the auction and buy the equipment, handed me Pepto Bismal with one hand and mace with the other. (Mace is legal here in Texas.) I didn’t know what to expect at the auction, but having been victimized by Operation Rescue’s pickets at both home and at the church where Bruce was a minister, I was anxious.

Arriving at the auction, I was relieved to see Dallas county constables everywhere. And when I was the successful bidder, they closed in around me to prevent anyone from Operation Rescue getting near me. One man tried to come up to me. The constables had forcefully to pull him back. He kept turning to me and shouting something like “I just want to make sure you are right with Jesus the savior.”

“That’s between me and Jesus,” I called back.

That man, wanting me to get right with Jesus, was the diary keeper – who spent his days harassing women and health professionals.